Sugarcane – a mystery of sweetness

Crunchy, juicy and deliciously sweet – that’s what chewing on a fresh piece of sugarcane tastes like. But why is sugarcane so sweet? A deceptively simple question that is surprisingly difficult to answer. Up to 75% of the world’s sugar comes from sugarcane – the rest from sugar beets predominantly grown in Europe. Both plants are unusual in that they store their sugars mostly in the form of sucrose, as opposed to starch, protein or lipids like other plants. Yet despite sugarcane’s ubiquitous consumption and claim to fame of being the greatest sucrose accumulator in the plant world, science has yet to fully crack the physiological and biochemical processes that make it so incredibly sweet. Nevertheless, we can venture a couple of hypotheses explaining why this crop has become the world’s most abundant source of sugar – and it is foremost to do with photosynthetic evolution and human selection.

Back to basics – all plants photosynthesize to produce sugars. They are exceptional sunlight-driven power plants, converting carbon dioxide and water into sugars and oxygen. With the sugars the plant fuels its growth, stores energy as starch and converts them into cellulose. Although plants are masters at it, photosynthesis is actually a pretty inefficient process. Uncultivated plants turn only about 0.2% of absorbed solar energy into photosynthetic output, a field of corn manages about 1-2%, and sugarcane – as one of the most efficient photosynthesizers – stands at a ‘whopping’ 8%. How does sugarcane manage to be so much more efficient than other grassy counterparts such as wheat, barley or rice? The answer is easy – sugarcane belongs to the exclusive club of C4 plants , which comprise only 3% of the plant kingdom. Together with another grassy relative – corn – and a lot of cacti, these types of plants have evolved a more efficient photosynthetic pathway. The rest of the plant world including cousins rice, wheat, barley and most of the world’s major food crops are C3 plants. Those come kitted out with the initial evolutionary bog-standard and much more inefficient version of photosynthesis.

Whilst this is fascinating, explaining the exact evolutionary science of these photosynthetic pathways goes beyond the scope of this article. Suffice to say though, that over the past 30 million years and in response to drastic climatological changes during the Oligocene ( 23 – 34 Ma ) – a transition period between the tropical Eocene and our more modern Miocene climate – a cluster of C4 plants developed this more efficient way of photosynthesis. During that time atmospheric CO2 concentration decreased, the landscape changed from humid tropical forest environments to dryer, hotter, open savannas and grasslands, and C4 photosynthesizers became more adept at fixing limited CO2 and water through solar energy into sugars. Apart from sugarcane, corn and sorghum are also grasses that belong to the C4 club, which store abundant sugars in their stalks. In fact, all plants store sugars in one form or another. So why does sugarcane stand out?

From pig food to rum

Initially, sugarcane probably wouldn’t have been as sweet as it is today. Human selection for sweetness and selective breeding for over ten millennia has evolved today’s sugarcane into the delicious treat it is. The first domestication of sugarcane occurred around 8,000 – 10,000 years ago in Papua New Guinea. There, Saccharum officinarum was popular as feed for pigs and slowly became a staple crop for Austronesian people all around the region. The next center of cultivation arose in Southeast China with S. sinense as the dominant variety. India followed becoming the first hub for organised sugarcane production. Up to this point sugarcane was mostly chewed to enjoy its sweet juice. In the Philippines sugarcane was brewed into a sort of wine. Indian ingenuity though, developed the first methods of sugar extraction around 350AD, which turned sugarcane from a popular crop into a coveted commodity.

Arab traders introduced the ‘sweet spice’ to the Middle East and eventually sugar became known in Europe as the ‘sweet salt’. The era of European seafaring and colonisation of the New World brought a boom in sugarcane cultivation. All around the tropics sugarcane plantations cropped up particularly in the Americas and the Caribbean. Some historians argue that the intensive economy of sugarcane plantations in the New World ignited the Industrial Revolution and ensuant prosperity of the Old World. In any case, modern consumption would be unimaginable without the sweetness of sugarcane nor would we have iconic Caribbean rums. 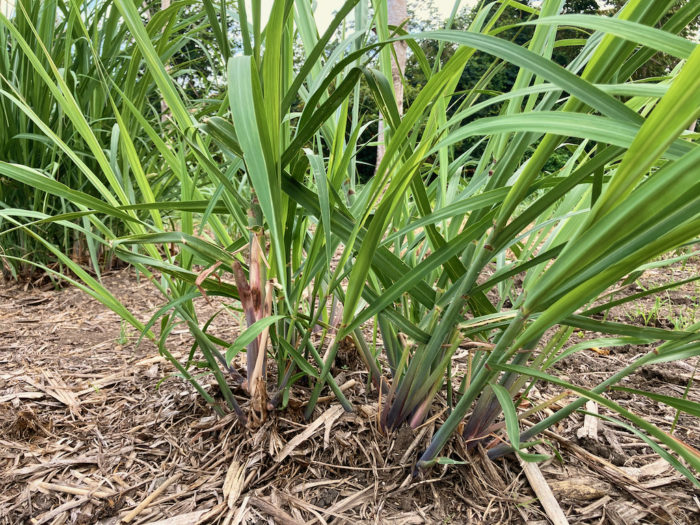 Thanks to sugarcane’s natural genetic potential and extensive human cross-breeding and hybridisation, there are now many sugarcane varieties specifically selected for yield, disease resistance, drought tolerance, fibre content and high sucrose concentration. Brazilian researchers have discovered that some sugarcane varieties can even fix atmospheric nitrogen – a premium ability for any plant. Unlike most other nitrogen-fixing plants though, this doesn’t occur through nodules in the ground but via the symbiotic relationship with a bacterium inside the tissue of the sugarcane. Where and how exactly this happens scientists are yet to map out, but apparently the high sucrose concentration inside the sugarcane tissue provides the perfect environment for the bacterium Gluconacetobacter diazotrophicus. This sugar-loving bacterium fixes nitrogen, making fertilizer for the sugarcane in exchange for basking in the sugarcane’s juicy sucrose – a sweet deal for both parties!

Now is that part of the reason why sugarcane is so sweet or just a beneficial side-effect? Hard to say, but due to evolutionary adaptation and human domestication, we’ve ended up with a prolific, efficient and sweet crop, that provides more tonnage per hectare than any other major food crop in the world. Interestingly, our biogenetic knowledge of sugarcane has for a long time been lagging behind other crops like wheat or barley. Partially because sugarcane has one of the most complex genomes of the plant kingdom to decode, and partly because it’s mostly grown in tropical developing countries, where global scientific interest and resources have been limited. Notable exceptions are Australia, South Africa and Brazil, from where lots of interesting research is emerging. Yet in general, even though sugarcane has been a staple of human civilizations for millennia, we’re just discovering how amazing this sweet grass truly is.